Wheat on a Chessboard — Calculated in Terms of Mass

I have long been fascinated with the difficulty we have dealing with the very large and the very small.  Our limited working memory can only hold so many chunks of information, and we end up using abstractions to refer to things that are too big or too small to deal with.  But, abstractions can lose their sense of proportion.

About a decade ago, I started playing with the “wheat on a chessboard problem”.  One thing I noticed is that virtually all of the depictions I've seen only work with numbers, digits, or exponents.  But, people already have trouble with numbers.  So to make the quantities more palpable, I decided to work it out in mass (~weight).

I started with a 40 milligram grain of wheat, but it quickly grew to tons, something that would easily fill a tractor-trailer grain truck.  Eventually, I had to switch to measure in terms of national yield, using years as the unit of measure.  Here's a breakdown:

Ultimately, because of the way this works, that last quarter essentially represents the majority of entire chess board, the first three quarters at about 12 megatons is just a drop in the bucket.  Switching to using the World wheat production of 2010 as a unit of measure made the numbers much more comprehensible—if you can call it that.  And given that this convenient unit is only one data point in an exponential growth over millenia, it may well be that this is more wheat than the total of all wheat that has ever been cultivated on this planet.  Anybody care to estimate that?  Mass-ive! (Seriously, massive, massive, massive) 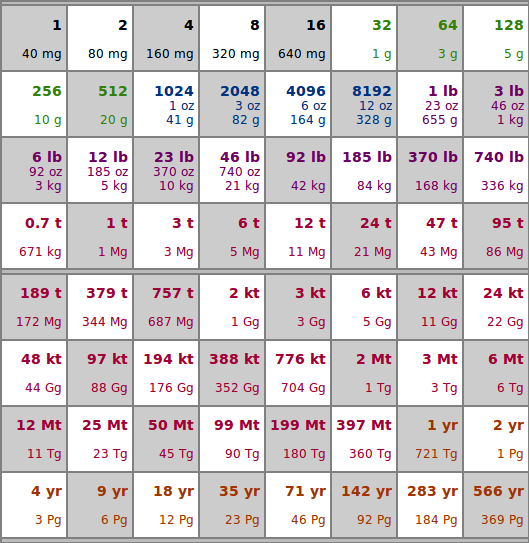 Wheat on a Chessboard by Count/Mass/Etc.

Note that this is an image captured from an HTML table.  I don't normally like to use an image where HTML/CSS would be better, but I dicided not to shoehorn the HTML/CSS code into this web-page builder.

March 4, 2018: Added image and coment, and revised text in first and last paragraphs.