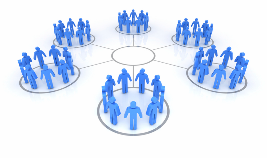 I've never been a fan of monopolies.  Now that online discussion is big business, it's become clear that there are monopolistic strategies being pursued by the big social media corporations.  And, I see monopolizing social media as being problematic—in the same way that monopolizing the media is.  One monopolistic strategy in social media is to capture a population by hiding the majority of content from those who don't login; and of course, logging in requires joining.  And, as such, I have never joined such a service, and it has become clear that I never will.  To join such a service would just make me feel like a prisoner in a despotic dystopia.

I know that there are those who feel obligated to have their businesses on such services, as do many of my spiritual friends.  But, that's actually a symptom that those social media services wield monopolistic power.  However, I don&#39;t want to impose my beliefs on others; and since I do have friends on those services, I would rather not be at odds with anyone about this.

I have also found myself waffling on the idea of having social-media "like" buttons on my site.  This template (the one I'm getting things going with) already had the Facebook button.  I found myself going back and forth about whether to remove it.  Technically—and full disclaimer, leaving it there would benefit me (egotistically, anyway)—through services that I don't respect.  So, keeping the button represents a hypocrisy that I'm not all that happy about.  But, I'm not going to try and stop people from referencing my writings in those places; I just don't think that's the right thing to do.  This stuff is supposed to reach those who need it and would be enriched by it (or, so I've been told).  So, I've decided that I just don't want to make it hard for people to "like" my pages, just because of my personal views.  So, it stays. I've decided that I will have "like" buttons, at least for now, and I will simply have to endure the jeers that I get for my hypocrisy.

Also, you'll notice that I've added Google+.  That wasn't on the template, and I felt that having only one social button on the page seemed unfair, unbalanced, and as if I were specifically endorsing Facebook—where you will never find me.  If anyone wants to see others, let me know by way of my contact page, and I'll give it due consideration.

I will also be linking to friends who are behind those online walls.  Yes, I did have to ponder this one a bit,  as well.  But, if I mention people, I don't want readers to have to go searching for them.  It's simply a matter of hospitality.

There is one other social-media service that I'm considering, and that's Disqus.  Even though I might tend to view all big, advertising-driven social media as monopolistic, this one is interesting because it brings the content to the pages [where] they are being discussed, rather than back at a mono-themed social media service—and no walls.  So, far the advertisements that I've seen appear tasteful, but I'll have to think about this one before I join.  And, I am will to consider suggestions on this.  Again, use the contact page.

Eventually, I will find a way to generate an RSS feed for my content.  If anyone is interested in having a mailing list provided for my content, which would be a ways off, let me know—again, on the contact page.  And, I know there is open-source social media.  It's something that I think about from time to time, but the thought never gained momentum.  Feel free to comment on that as well.  page element.